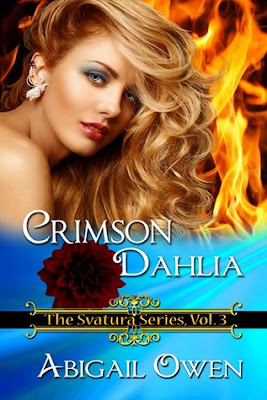 
When Lila Jenner leaves her family and friends to start a new life for herself, Ramsey Pierce lets her go. Determined that the fire raging inside him will never harm her, he denies the magical bond that could be theirs alone.

When an old enemy resurfaces and Lila suddenly disappears, Ramsey realizes that he'll do anything to win her back and keep her safe beside him. But Maddox, driven by a centuries-old quest for revenge, is stronger than they ever imagined. And Lila could be the key to his ultimate power.

Friends and enemies must band together against this shared threat if any of them are to survive. Even then, they may all discover too late that one dragon is not always enough…

I don't know how it is even possible for this series to get better, but somehow it does. Going into Crimson Dahlia I thought that there was no way for it to live up to Hyacinth, however, I was terribly wrong!

In this installment, there was romance, action, and a whole lot of mystery. Every time a question would be answered, I felt as if five would magically appear. Of course this means that I can't wait to read the next one and finally figure out what is going on! So, despite how I know that I'm going to be wrong, I'm going to go ahead and say that Crimson Dahlia is my favorite in the series (Miss Owen will undoubtedly prove me wrong with the next installment, I'm sure of it!)!!

One of my favorite things about this series is how each installment focuses on a different couple, however, the characters you have came to know and love are still involved in the story. This enables the characters to be more developed and you get to see multiple sides to every character...and, these are some really great characters! Also, who would have known how awesome Ramsey would have turned out to be!! The chemistry between him and Lila was absolutely on fire!

"Sheesh. I get myself a little bit captured, and all sorts of interesting things happen."
Email ThisBlogThis!Share to TwitterShare to FacebookShare to Pinterest
Labels: Abigail Owen, Book Review, Fantasy, Young Adult